From Kruger to KwaZulu Natal, South Africa is home to some of the most stunning scenery and best wildlife in the world. It’s no wonder that South Africa remains one of our top holiday destinations! But when it comes to exceptional wildlife, it’s not all about national parks and big game safaris. In fact, we happen to believe that some of South Africa’s finest wildlife is to be found in some of its smaller, lesser-known nature reserves. Join us as we explore the rich biodiversity of the Cape of Good Hope and the wild Cederberg Mountains, as well as the vast De Hoop Marine Reserve, ancient Robberg and the treasure trove of Tsitsikamma on a South Africa wildlife holiday featuring some of the best nature reserves South Africa has to offer…

Perched right on Cape Town’s doorstep, there’s no denying that the Cape Peninsula and the Cape of Good Hope is one of the most stunningly scenic parts of South Africa. But whilst Cape Town is undoubtedly one of the world’s most beautiful cities, the Cape Peninsula is still pretty underrated. Yes, most visitors on a South Africa wildlife holiday will venture down to Cape Point during their trip to see where the Atlantic and Indian oceans meet, but there’s so much to see and explore in this region – in fact, you could easily spend a good few days here!

The Cape of Good Hope Nature Reserve, part of the Table Mountain National Park, is as remote as it is beautiful: think towering cliffs, beautiful bays, tidal pools and waves crashing onto secluded coves. The area is world-renowned for its natural vegetation and rich biodiversity, and there are plenty of activities on offer too, from kayaking and mountain biking to bird watching. There are also numerous picnic spots to stop at as you venture down winding paths and hike through the native fynbos vegetation in search of stunning secluded bays. There’s even a shipwreck trail!

When it comes to wildlife, expect to see over 250 species of birds, buck, baboons, Cape mountain zebra, antelope and ostrich on your travels, to name but a few. In the right season, you might even be able to spot whales making their annual migration journey past the Point. On your way back to Cape Town, make sure you pay a visit to the penguin colony of endangered African penguins at Boulder’s Beach, too. 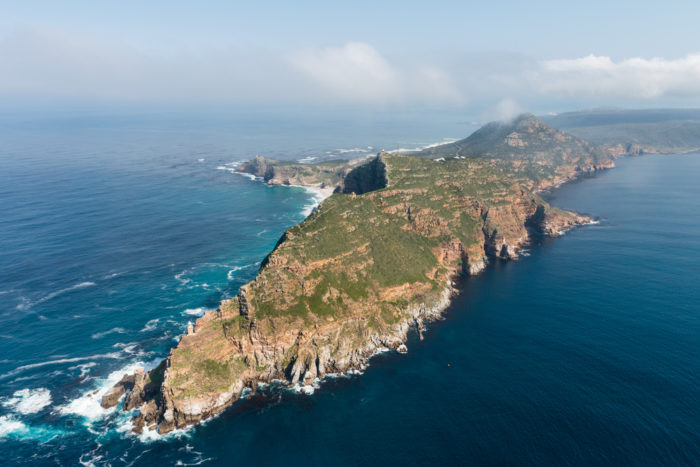 Just two hours north of Cape Town, you’ll find the Cederberg region, a dramatic wilderness area that’s dominated by craggy mountains. It’s wild, it’s raw, and it feels more remote than almost any other region in South Africa. Declared a wilderness area in 1973, the area enjoys the highest possible conservation status and is best-known for its jagged rock formations, beautiful valleys and spectacular flowers (it’s part of the Cape Floral Region and one of the most special places in the world for plants).

The area is rich in history, too. Nestled under cliff edges, you’ll find traces of the original indigenous inhabitants of South Africa in the form of rock art. In fact, Cederberg is one of the best areas for ancient rock art in the world with over 2,500 sites that date back almost 10,000 years. You can also enjoy some of the world’s best hiking here, as you make your way along ancient mountain trails past fynbos and quirky rock formations without any other people in sight.

The wildlife here is pretty impressive as well: keep an eye out for herds of game such as Cape mountain zebra, bontebok and red hartebeest. They typically get overlooked for famous game reserves in the hopes to get a glimpse of the Big Five but trust us – the sight of these magnificent animals in such a stunningly beautiful setting will take your breath away.

Also look out for baboons, dassies, grey rhebok, klipspringers, duiker and grysbok. The leopard, Cederberg’s largest predator, is fairly common here – although painfully shy – and other smaller predators include African wild cat, lynx, bat-eared fox, aardwolf and Cape fox. The region is also home to beautiful birdlife too, with over 100 bird species including black eagle, rock kestrel and jackal buzzard. 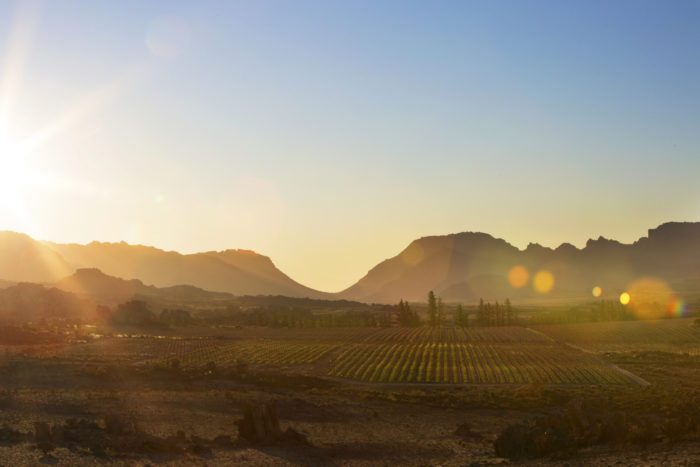 Approximately 34,000 hectares in size, the entire length of the De Hoop coast is a marine protected area. Believe it or not, most South Africans have never heard of the De Hoop Nature Reserve – which is shocking considering how incredibly vast and beautiful it is. There is a positive to this, though: it’s never overwhelmed by tourists so you can have this stunning region pretty much to yourself!

In the nature reserve, drive yourself around the network of roads, hop on a mountain bike or simply hike along the paths; the choice is yours – although we will say the De Hoop is home to one of the best hiking trails in South Africa, the Whale Trail. With vegetated dunes covered in fynbos and a huge variety of flora and fauna, including the proteas (South Africa’s national flower) to long coastlines of white sand beaches, the reserve is as vast as it is beautiful.

When it comes to wildlife, you’re in for a treat. De Hoop’s many habitats house a huge range of wildlife, so look out for 86 mammal species, including the rare bontebok and Cape mountain zebra, as well as eland, grey rhebock, baboon, yellow mongoose and even the occasional leopard. Marine animals such as dolphins and seals can be spotted off the coast, and because the reserve encompasses the breeding grounds of the southern right whale, during whale season, it’s one of the best places to see whales breaching from the shore. It’s estimated that around 120 individual whales return to the waters of De Hoop every year to calve, and the sight of one of these magnificent mammals leaping out of the water is an incredible experience.

The adjacent De Hoop Marine Reserve extends 5km out to sea, and due to its main protected status, you’ll also see some of the finest examples of inter-tidal ecosystems and other fascinating marine life, too, including over 250 species of fish. If that wasn’t enough to tempt you, the birdlife is pretty impressive here as well – in fact, there are more than 260 species, including a large number of water birds, as well as the African black oystercatcher: watch as they expertly dodge waves and turn away from the tide as they feed on mussels, limpets and whelks. 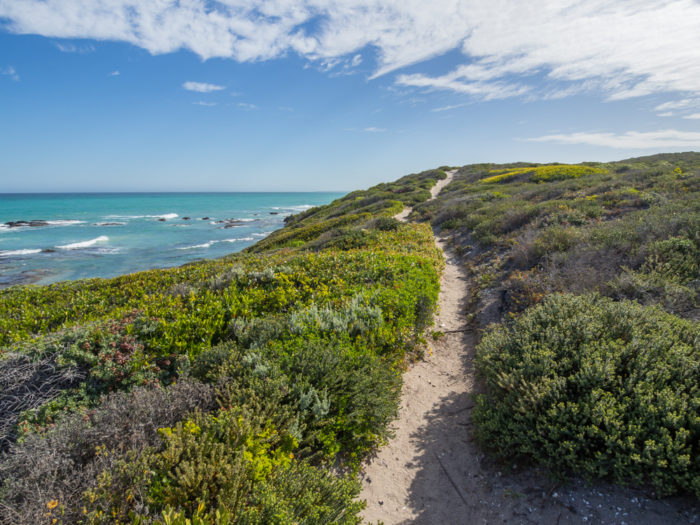 Located 8km south of Plettenberg Bay on the glorious Garden Route, Robberg Nature Reserve is a reserve, national monument and World Heritage Site with rocks from this region dating back an unbelievable 120 million years. Understandably, there’s no development allowed here, which means it’s an incredibly remote, beautiful and unspoilt spot – and the perfect addition to any South Africa wildlife holiday.

Here, steep rocky ridges drop down to sandy beaches (often covered at high tide) and the harsh winds have resulted in low, scrub-like vegetation and sand dunes. In fact, it’s only accessible via one of three circular hiking routes and can only be reached at low tide. Basically, if you want to get close to nature, Robberg is the reserve for you.

The incredible Robberg Hiking trail is a must for wildlife lovers: keep an eye out for Cape fur seals (you’ll probably hear them barking long before you spot them), and look for dassies scurrying under rocks as well as other wildlife such as grey buck and the rare blue duiker (the Western Cape’s smallest antelope). You might even be lucky enough to spot Cape clawless otters and mongooses.

And that’s not all: Robberg is also the perfect vantage point for whales and dolphins, so you can expect plenty of whale and dolphin sightings in season which is June to November – even orca whales have been known to be spotted in the bay. If that wasn’t enough to tempt you, there’s also a large variety of bird species such as Cape robins, Cape white-eyes, orange-breasted sunbirds and red-winged starlings, as well as swift terns and kelp gulls. 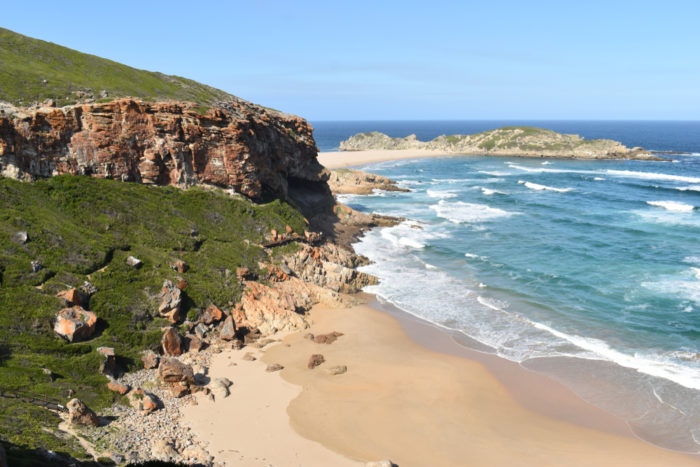 Tsitsikamma National Park begins just east of Plettenberg Bay and covers a vast stretch of coastline (over 80km, in fact!) as well as thickly forested hills and dramatic steep canyons. Named after the San word meaning “place of abundant water”, the region is like a treasure trove of flora, fauna and wildlife and is a huge protected conservation area that supports an incredibly diverse ecosystem.

There’s plenty of activities on offer here, from excellent hiking routes, kayaking, diving, tubing along the rivers, and other adrenaline sports such as climbing, abseiling, mountain biking and even bungee jumping – in fact, standing 216 metres above the Bloukrans River,  Tsitsikamma is home to the highest commercial bungee jump in the world. Not quite so high but equally impressive, the Storms River Mouth is pretty spectacular, too. A steep canyon that cuts through the cliffs out into the ocean, there’s a rope suspension bridge crossing the river where it meets the ocean where you can stand and watch the dark river water meeting with the ocean swell below.

It’s not all about the activities, though. Tsitsikamma is also home to a huge array of wildlife, including dolphins and porpoises, African black oystercatchers, the shy Knysna lourie, Cape clawless otters and the rare blue duiker. In addition, to the west of the forest, you’ll also find four fantastic eco-ventures: an elephant sanctuary where you can walk hand in trunk with elephants, Monkeyland, the Birds of Eden and Tenikwa Wildlife Centre which is home to African wild cats such as leopards, cheetahs and caracals. 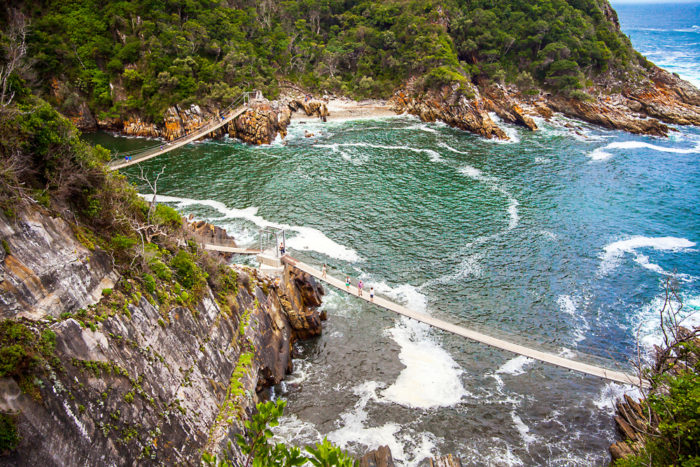 In conclusion, with so many nature reserves and national parks, it’s no wonder South Africa remains a firm favourite on any wildlife lover’s travel wishlist. If you’d like to start planning your South African adventure, get in touch with the team at Holiday Architects today. With years of on-the-ground knowledge and some of the best advice in the business, you can trust us to design the perfect itinerary for you. Contact us today for a quote.