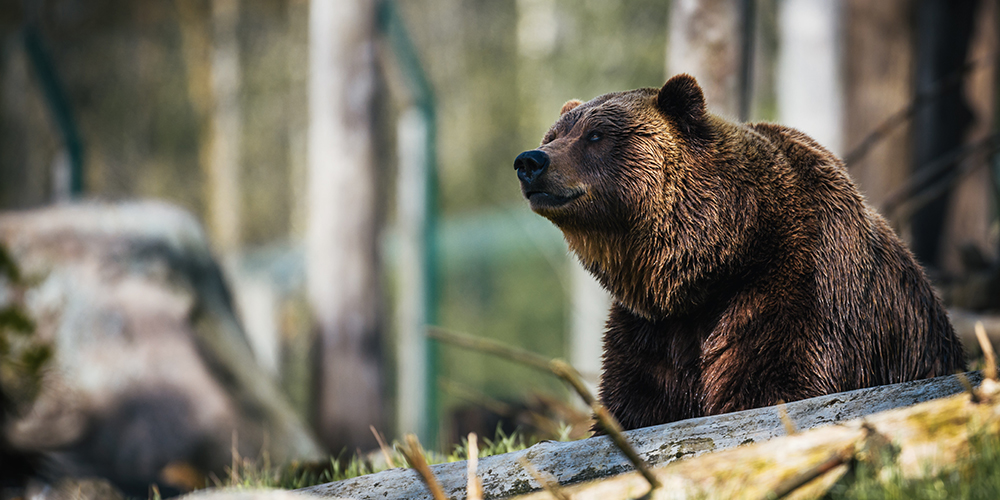 There’s something about viewing wildlife in its natural habitat that can stir the budding naturalist deep inside of us. Whether that’s a feeling of connection to the great ‘circle of life’ or a humble realisation of how wonderful this world really is, few experiences bring on the goosebumps like a wildlife encounter can. And a Canada wildlife holiday really does deliver on that front.

Canada is as beautiful as it is big. The country boasts the world’s longest coastline, some of the most magnificent landscapes on earth and an impressive medley of iconic animal inhabitants hidden within its far-reaching national parks. Gawp at the grizzlies, spot polar bears and pinch yourself as whales breach the water in front of your very eyes. Here are some of the best wild wonders you could encounter on your Canada wildlife holiday. 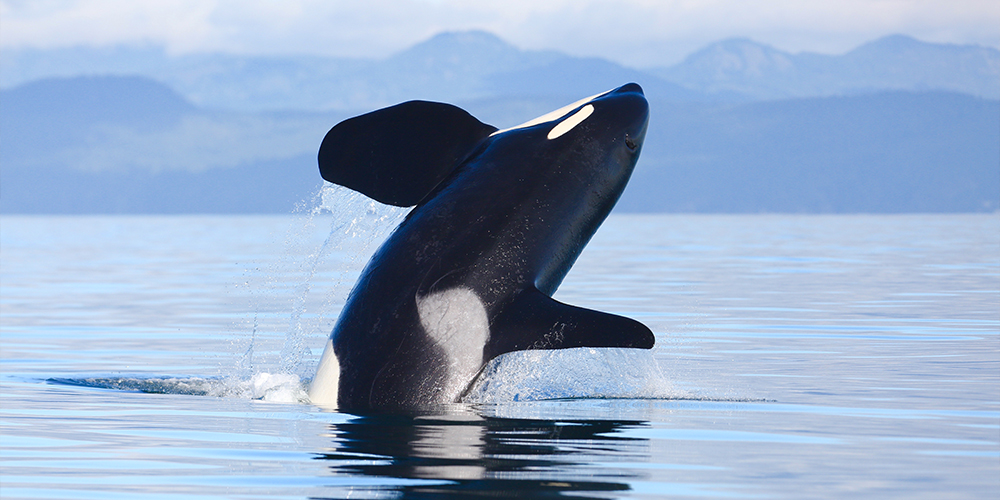 If whale-watching has a place on your travel bucket list, then a Canada wildlife holiday is for you. Canada boasts the longest coastline in the world; a thriving playground for marine life. The opportunity to witness a whale breaching is one of the country’s most irresistible draws. Take a whale-watching trip out from Vancouver Island in the hope of catching a glimpse of one of British Columbia’s Orcas (they boast the highest population of killer whales in the world, so your chances are looking good!). Or head to Newfoundland to try your luck at seeing the largest animal that has ever existed, the blue whale. These are elusive and sightings are never guaranteed, so be sure to cross all your fingers and toes before you head out. Gray, minke and humpback whales can also be spotted in Canada’s waters. Regardless of breed, seeing one of these impressive creatures leaping out of the ocean playfully before your eyes is set to be a highlight of any trip. 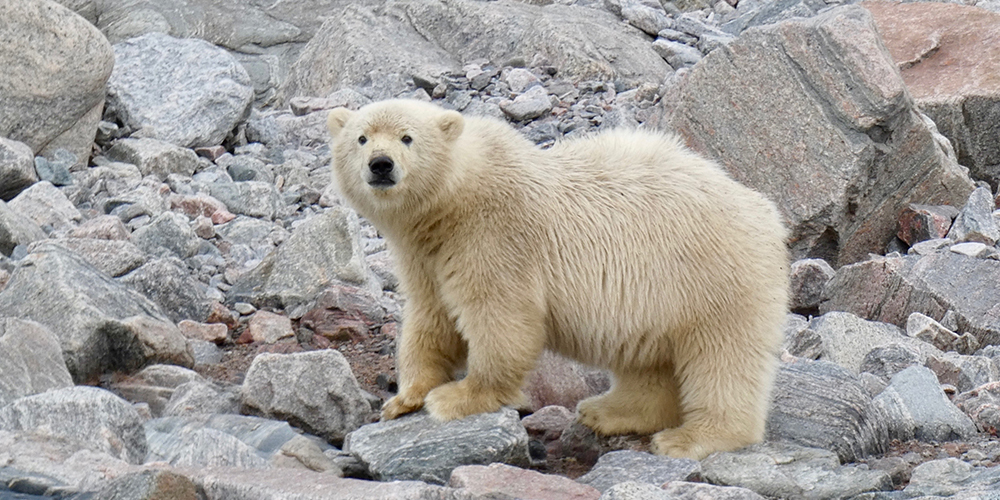 Did you know that Churchill, Canada, is the ‘Polar Bear Capital of the World’? Well you do now! It’s a unique place to visit, nestled amongst a vast landscape of tundra on the edge of Hudson Bay, it’s not the easiest spot to get to, but that just adds to its charm!

Between October and November, the population of polar bears is so huge in Churchill that they’ve been known to outnumber the human residents. Take a tundra buggy tour during your Canada wildlife holiday and keep your eyes peeled for a glimpse of one of these elusive, beautiful creatures searching for food. They’re fairly good at keeping themselves hidden, but a polar bear sighting would be the cherry on top of any Canada wildlife holiday itinerary!

If you’re longing to go bear watching, British Columbia is one of the best places in Canada to get the show on the road.

With a fantastic range of perfectly-positioned hides and lodges (one of our favourites is Knight Inlet Lodge!) you can choose from a memorable day trip or a multi-day stay in the wilderness for a true once-in-a-lifetime experience.

The pristine environment of the Great Bear Rainforest is home to grizzlies, black bears and one of the rarest animals on earth; the rare and revered spirit bear. This black bear with a white coat is notoriously difficult to spot, but one for the boasting books if you manage it! Or take a bear-watching boat trip out on Clayoquot Sound, on the west coast of Vancouver Island, for the chance to see bears foraging the coastline for food! Simply put, a visit to British Columbia is the ‘Bear Necessities’ of Canada wildlife holidays. 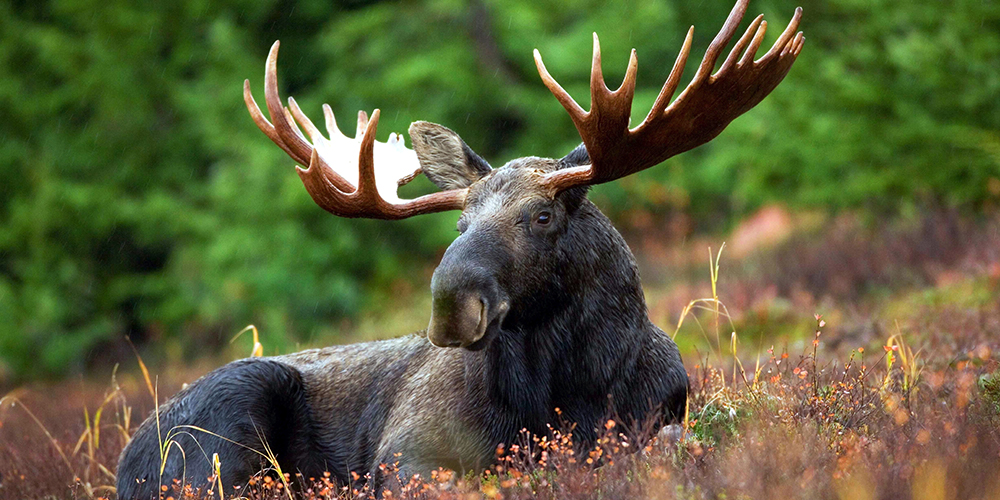 These adorably goofy animals look like they’ve trotted straight off the pages of a caricature. With their long noses, wide-set eyes, large ears and over-sized antlers, the moose is a national Canadian symbol. Representing the country’s native wildlife, four subspecies of moose can be seen throughout Canada. Take an evening wildlife safari in Banff National Park on your Canada wildlife holiday, or head to Cape Breton, in Nova Scotia. With one of the highest densities of Moose in Canada, an early evening foray in the park is sure to be rewarded with a glimpse of this dorky, largest living relative of the deer family grazing in the long grass. 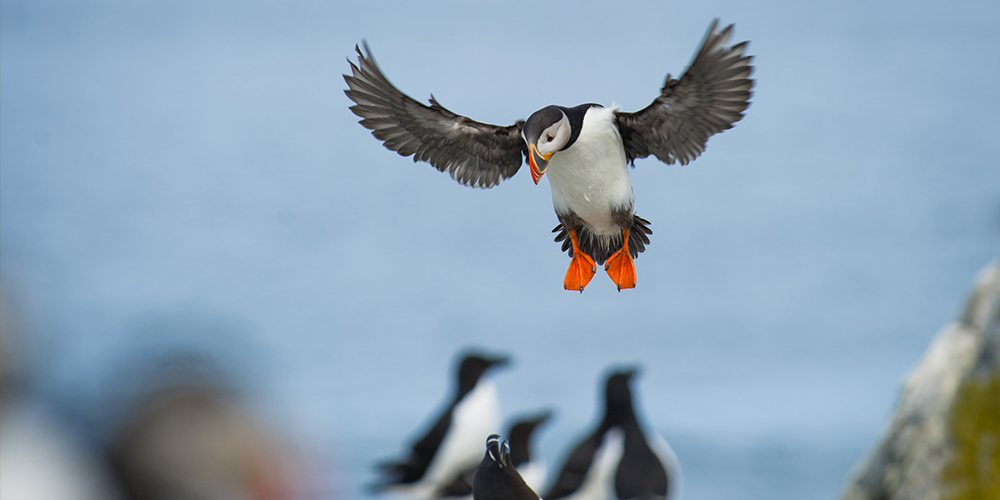 Native to the Atlantic Ocean, this adorable bird is best seen on islands off the coast of Newfoundland, where 60% of the population breed. Despite having wings, the Atlantic Puffin isn’t particularly blessed in the flying skills department. Having to flap its wings an energy-sapping 300-400 times every minute just to stay airborne, they’re more at home with their webbed feet on solid ground or even swimming underwater. Head to the Avalon Peninsula, in the far south-eastern corner of Newfoundland, and treat yourself to a puffin-spotting boat trip. You may well be lucky enough to spot whales too! 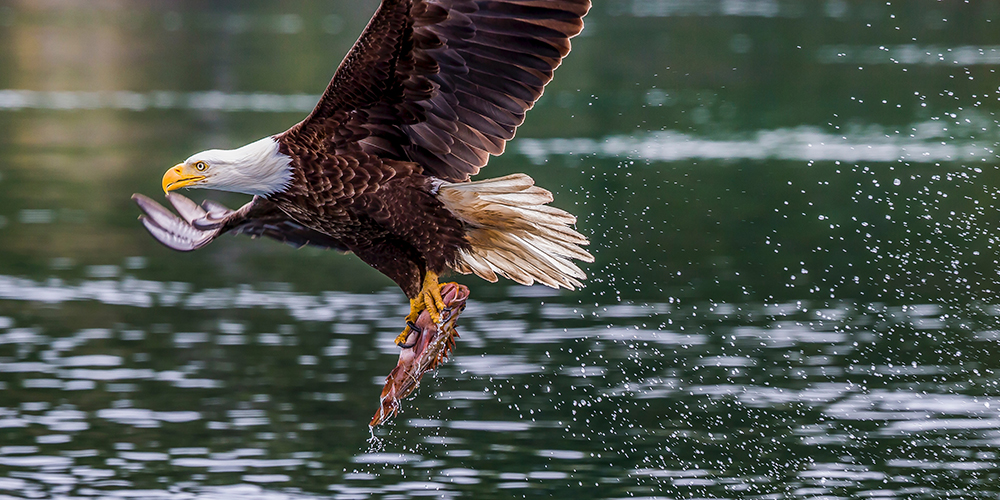 The bald eagle (that isn’t actually bald!), is an impressive bird. With their staggering wing-span of 2+ meters and their ‘eagle-eyed’ ability to see between four and seven times as far as humans, a bald eagle encounter is sure to be magical – especially if you’re a twitcher! The only eagle native to North America, the bald eagle rules the roost and enjoys a privileged spot right at the top of the food chain. So, if you visit the coast of British Columbia during your Canada wildlife holiday, don’t forget to look up! It shouldn’t be too long before you see one of these majestic birds, gracefully soaring through the crisp and blue Canadian skies.

Fun fact: If a bald eagle loses one of its wing feathers, it will lose one on its other wing to maintain balance. What a flying genius! 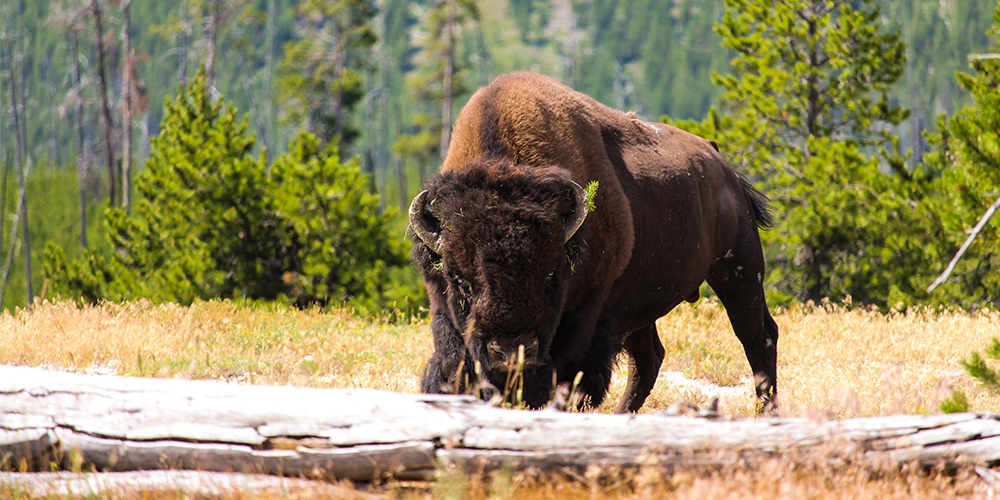 The shaggy-haired bison had a scary brush with extinction back in the 1900s when their numbers dropping significantly. Now though, around 2,000 of them can be found living in conservation herds throughout Canada. Plains bison have been reintroduced to several wilderness parks in the province of Saskatchewan, and in Prince Albert National Park you can even go looking for them on horse-back. You may hear the thunder of their hooves through the forest before you see them but knowing you are that close is still a spine-tingling experience…! 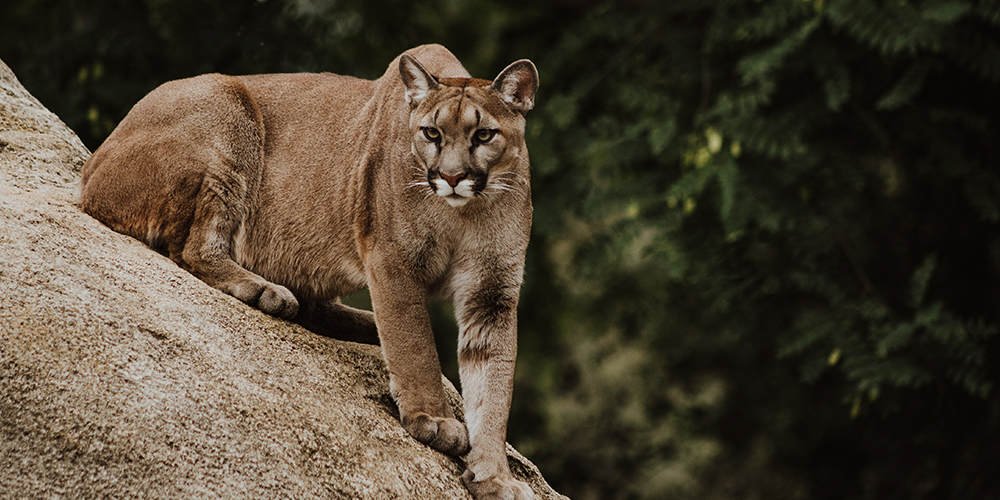 Big cats might not come to mind first when you think of a Canada wildlife holiday, but the country is home to around 4,000 cougars. They’re solitary cats and tend to roam in places where they’re unlikely to be seen, so ticking one (safely) off your wildlife-spotting list, might be a bit of a challenge. Found in the depths of the forests and Rocky Mountains around northwest Alberta and British Columbia, you wouldn’t want to encounter one on a solo hike! Their ability to leap forward up to nine metres at a time make them a formidable predator in the wilds of Canada. 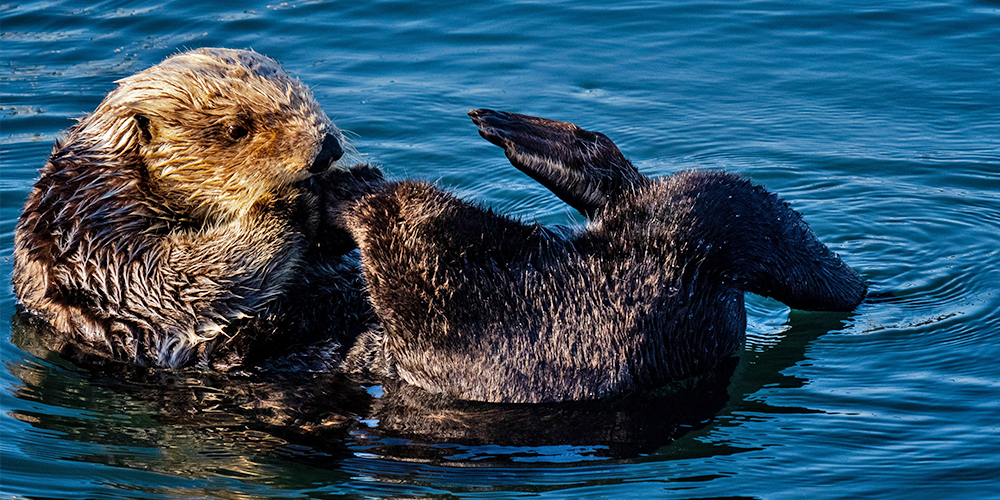 These gorgeous, smiley creatures can be seen all down the west coast of Canada and both sides of Vancouver Island. They have no layer of fat under their skin, but their super dense hair (up 1,000,000 hairs per square inch in places!) does a great job at keeping them warm in the icy waters. Due to their remarkable coat, they have had a tricky time of it in the past. Commonly hunted for their fur, they were nearly extinct in the early 1900s. Things are looking much brighter for the population now though, with many of these furry friends popping up along Canada’s west coast. Partial to bobbing along on their backs, these sea otters are so adorable you may have to actively resist the urge for a cuddle. 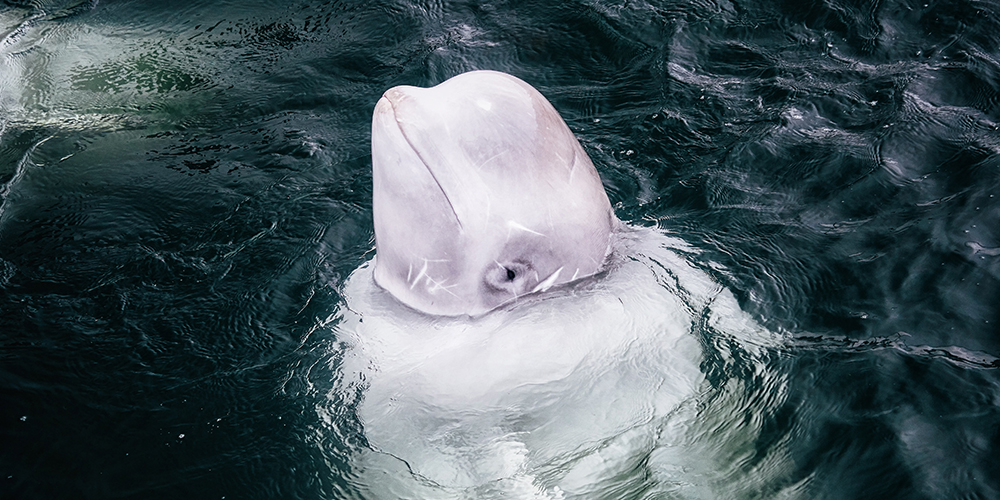 It isn’t just polar bear viewing that Churchill is renowned for. You can also spot these quirky white sea mammals! From June to September every year, the Churchill River becomes the meeting point for large pods of curious beluga whales moving in from the cold waters of Hudson Bay to feed and give birth. A boat trip will take you out into the river estuary to get close to these gentle, playful, and utterly captivating creatures.

With the prospect of seeing both polar bears and these unique white whales in the wild, Churchill really does offer pinch-yourself wildlife viewing experiences.

If any of the above has tickled your fancy and awakened your inner wildlife-lover, give our Canada specialists Helen or Rod a call on 01242 253 073 to talk about all things Canada today. They’ve both spent a great deal of time in the country, jumping headfirst into any experience offered and have a host of first-hand knowledge to share.

Alternatively, fill in our quick and easy form to get a free quote for your very own tailormade Canada wildlife holiday…