Discover the cities of Eastern Canada

Exploring the four cities of Eastern Canada feels like visiting four different countries in one holiday. From the sprawling metropolis of Toronto and charming Ottawa (you’ll be hard pushed to find such a friendly capital anywhere else in the world) to the French, walled city of Québec and multicultural Montréal, each city has its own unique and distinctive character. It is also extremely easy to get between them by train, making a trip to the cities of Eastern Canada an ideal holiday for those who don’t want to drive. With so much to see and do, we’ve put together our highlights and top tips for each city below – so fasten your seatbelts and join us on our whistle-stop tour to the cities of Eastern Canada. You’re in for a treat! 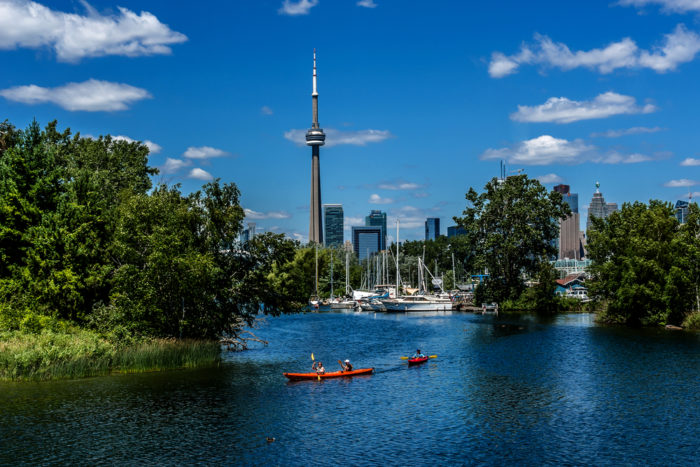 Canada’s largest city has a population of around 2.8 million – but, despite its size, the people are friendly, the vibe is laid back, and it’s one of North America’s safest cities to visit. There are many different sides to this buzzing city: with a world-class theatre, a thriving food scene featuring some of Canada’s best chefs, an incredible range of galleries and museums, beautiful parks, bustling markets, historical buildings and a cutting edge art community, you’ll be spoilt for choice.

So, where to start? We recommend venturing up the CN Tower for unbeatable views – at 533.33 metres, it was the world’s tallest tower until 2010. Best done first thing to avoid the queues, the LookOut deck offers incredible vistas over the city and Lake Ontario – thrill seekers can even sign up for the Edge Walk where, harness firmly on, you can move around the ledge, lean out, look down and wave to the camera! If you venture another 33 storeys up to the Sky Pod, you might even be able to see the spray of Niagara Falls in the distance.

CN Tower done, walk 20 minutes downtown to St Lawrence Market for fantastic food and a variety of local merchants who are all incredibly passionate about what they sell. A number of Toronto’s main attractions are found downtown and this area is brimming with multi-cultural influences, which means you can amble around the galleries, sample delicious food or just sit and people watch on the busy harbour-front. Alternatively, you could take a ferry over to the Toronto Islands, an oasis of car-free parkland with beautiful beaches.

And, of course, no stay in Toronto would be complete without a trip to Niagara Falls, which is just an hour and a half away. Here, you can venture out on a boat trip right up to the base of the thundering Horseshoe Falls before exploring the pretty town of Niagara-on-the-Lake or visiting a vineyard for a chance to try the Canadian speciality, Ice Wine. Made from grapes that have been naturally frozen whilst still on the vine, this honeyed, richly-textured, golden liquid is absolutely delicious! 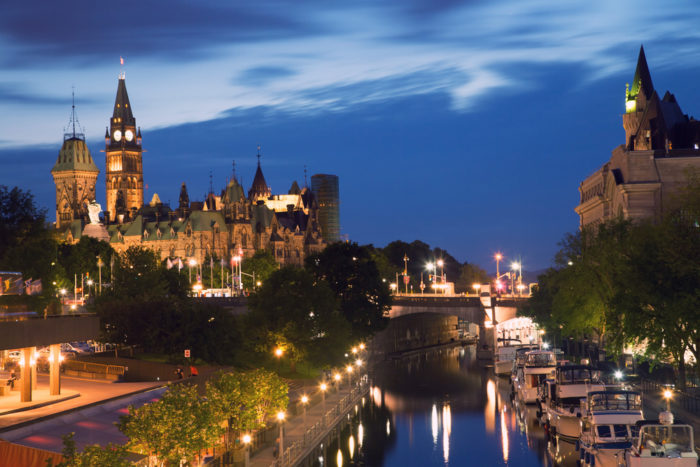 Despite its importance in the country’s political landscape, Canada’s capital, Ottawa, remains humble and unassuming. Small and incredibly friendly, it’s an absolutely charming city that’s best explored on foot or by bike. We’d recommend starting with an amble along the pretty UNESCO-listed Rideau Canal: adorned with tulips in the spring, red and gold leaves in the autumn and transformed into the world’s largest ice skating rink in the winter, it’s popular for recreational activities and flanked by parks and walkways, as well as eight successive locks that allow boats to gently descend into the Ottawa River.

After you’re done strolling along the river, make sure you pay a visit to the parliamentary complex on Parliament Hill with its striking neo-Gothic towers (the Central Peace Tower is often referred to as Canada’s version of Big Ben). Here you can take a guided tour of the Houses of Parliament and learn all about Canada’s political history.

Next up, head to the downtown markets. We love ByWard Market, one of Canada’s oldest and largest public markets that’s like a mini Covent Garden where you’ll find everything from outdoor restaurants, buzzing bars, fruit and flower stalls, boutique shops and art galleries. Whilst on the subject of art galleries, we’ve got to mention Ottawa’s numerous state-of-the-art museums and galleries. Be sure to look around the National Gallery of Canada – prefaced by a giant spider – which houses the largest collection of Canadian and Inuit Art in the world. The Canadian Museum of History is also well worth a visit and gives a fascinating insight into the cultural history of the country. 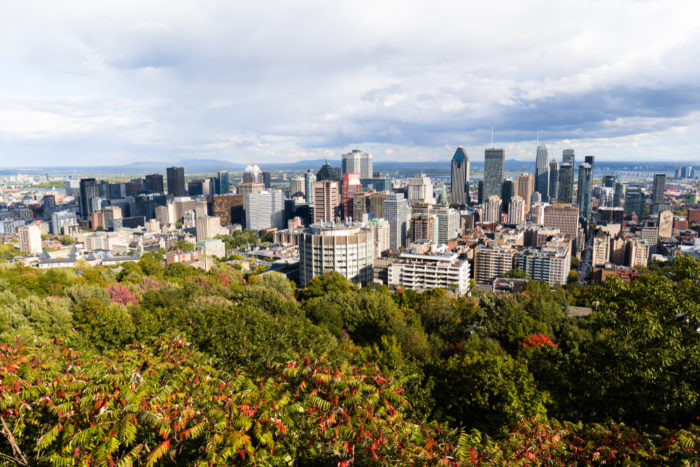 With its irresistible combination of traditional French flair and cosmopolitan creativity, the island of Montréal sits at the confluence of the Ottawa and St Lawrence Rivers. The second largest city in Canada, multicultural Montréal is often considered Canada’s most flamboyant destination. It’s got a long history and is France’s home away from home – in fact, the city’s official language is French, and the result is an incredible melting pot of culture with an eccentric atmosphere, plenty of culinary experiences and more than 100 festivals a year.

Stroll the charming cobbled streets of Old Montréal, the historic heart of the city near the waterfront. It has a feel of 16th-century France and is one of the best places to soak up the city’s atmosphere thanks to its plethora of historic buildings as well as quaint little cafes and charming galleries. There’s also plenty of quirky shops where you can pick up a souvenir or two as well. Make sure you visit the impressive Notre-Dame Basilica with its grand wooden panelling, intricate stained glass windows and hand-carved sculptures; we’d recommend climbing the 69 steps to the top for stunning views across the city and St Lawrence River below.

You can also enjoy a leisurely stroll along the Old Port to the Place Royale, before heading north towards the Christ Church Cathedral where you’ll find the Promenades Cathédrale, part of Montréal’s 20-mile long Underground City, underneath. We’d also suggest a trip on the Montréal Observation Wheel, the tallest in Canada that offers unbeatable views over the city.

Back on the ground, head to the Jean-Talon Market for local produce, sweet treats and multicultural flavours and delights abounding. A landmark of Little Italy, this buzzing market where friendly merchants showcase their exquisite products is one of the oldest open-air markets in North America. If you fancy a bit more retail therapy, both Sherbrooke Street and Rue Saint-Denis have plenty of speciality shops and trendy boutiques – and once you’ve worked up an appetite, there’s an impressive variety of restaurants to try. 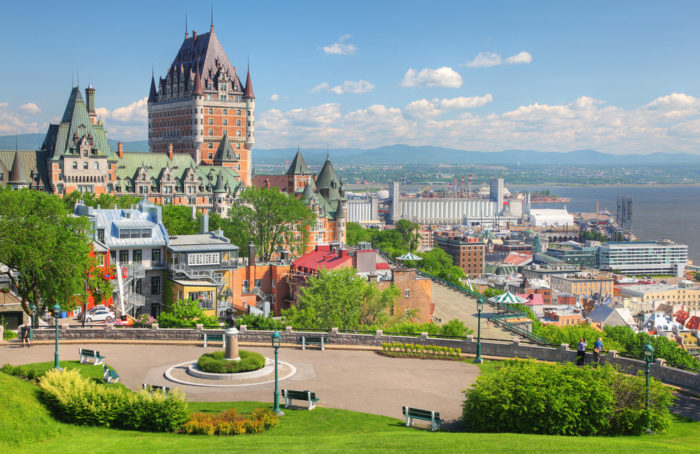 The grand, historic city of Québec is one of the oldest European settlements in North America. The picturesque Old Town is a UNESCO World Heritage Site and it’s easy to see why: think cobbled streets, craft shops, soaring church spires and fascinating murals, all partially surrounded by an ancient fortress. The locals here are incredibly passionate about their city – and, despite all the European influences, somehow Old Québec has its own unique charm that draws you in from the moment you arrive.

The city is definitely best explored on foot, so we’d recommend going on a walking tour to learn about the history and visit key historical sites such as the Citadel, Musée Royal, Château Frontenac, Québec fortifications and Place Royale. Also, make sure you visit the historic Quartier du Petit Champlain, the oldest shopping district in North America – it’s the perfect place to soak up the atmosphere with an early morning coffee. It’s also a foodie heaven and full of artisan food producers who draw upon English, French and American influences.

The Old Town is split between the Old Upper Town (Haute-Ville), perched above the St Lawrence River on the Cap Diamant cliffs, and the Old Lower Town (Basse-Ville), where Samuel de Champlain established the first French foothold in 1608. In the walled Old Upper Town, you’ll find elegant homes, quirky shops, and prominent historical buildings, whilst the Lower Town sits 398 steps below with its narrow winding streets lined with boutique shops, street performers and artisan restaurants.

Outside the walls of the old city there are more neighbourhoods to explore such as St-Jean-Baptiste with its hipster vibe, and St. Roch where fantastic new restaurants and eateries are popping up all the time. And if you want to venture even further outside of town, why not head to the gorgeous Montmorency Falls? Standing 30 metres higher than Niagara, it’s well worth a visit – hitch a ride to the top on a cable car and walk the full width of the falls on a suspension bridge for an unforgettable experience!
In conclusion, from charming UNESCO-listed towns to multicultural metropolises, the cities of Eastern Canada have something for everyone. Our Canada team have a wealth of on-the-ground experience and can offer unbeatable insider knowledge and share their expert advice, helping to plan a holiday that is completely bespoke to you. Ready to start making memories in Canada? Contact the team today for a quote!